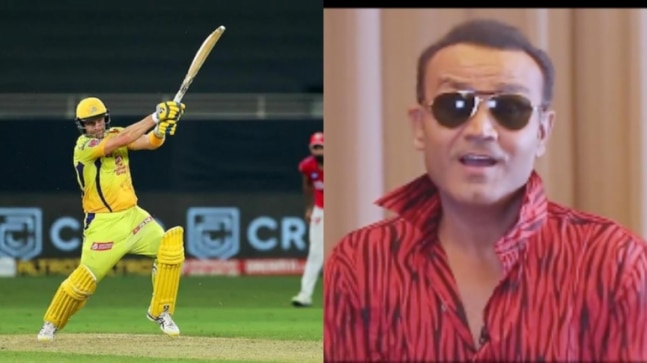 Fans of IPL and Chennai Super Kings (CSK) are ecstatic as the MS Dhoni-led side got over their 3-match losing streak and registered a crushing 10-wicket win over Kings XI Punjab (KXIP) to roar back to form.

Before the win CSK had lost 3 out of their starting 4 matches and were at the bottom of the points table but the emphatic victory in Dubai has helped them move to the number 6 position of the 8-team points table of IPL 2020.

Winning the toss and batting first in Dubai has been a norm of sorts this season as teams doing that have emerged victorious every single time but KXIP brought an end to it on Sunday.

Reacting to the dismal performance for KL Rahul’s KXIP, Virender Sehwag said, “Only Punjab can lose the match even after batting first in Dubai.”

The former India and Kings XI Punjab opener hailed MS Dhoni’s captaincy, saying that it played a huge role in the shift of momentum in the 18th over of Punjab’s batting innings.

Dhoni had introduced Shardul Thakur to bowl the over and he responded with 2 massive wickets of set and in-form Nicholas Pooran and KL Rahul on the starting 2 deliveries. KL Rahul’s wicket especially, looked a well planned one. Shardul bowled a full wide delivery which Rahul edged to MS Dhoni while trying to chase and hit it. Ravindra Jadeja also contributed in the over by taking a very well judged catch of Pooran at the boundary line.

“By the way the thing which has been trying to start since 19th September, that diesel engine Watson finally started. He and ‘Sambha’ Faf du Plessis got together and took took the Punjabi lads for a tour of the stadium, hitting the ball everywhere,” Virender Sehwag while talking about the special knock from the Australian legend.

Bihar chief minister took a jibe at his opponent Tejashwi Yadav‘s offer of 10 lakh jobs if he wins elections asking where will he get the money from to fund such a move. He urged people at a rally in Gopalganj to not get misled by such offers. Attacking the RJD, the CM asked how […]

In the 14th match of IPL 2020, between Sunrisers Hyderabad and Chennai Super Kings, Khaleel Ahmed was seen in pain at the end of the 17th over, which was bowled by pacer Bhuvneshwar Kumar. On English commentary, Kevin Pietersen made a remark that didn’t go down well with the Twitterati. The former English cricketer implied […]